The battery-powered exoskeleton ExoActive from Festool actively reaches out to help craftsmen and women. The ExoActive can be worn like a backpack and can be individually adjusted. 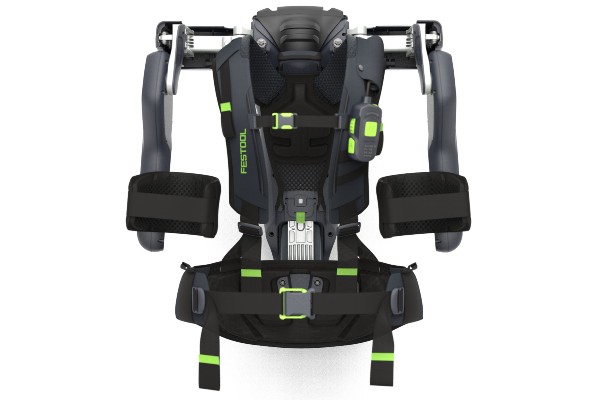 The exoskeleton forms a unit with the body. No component interferes, no belt constricts. 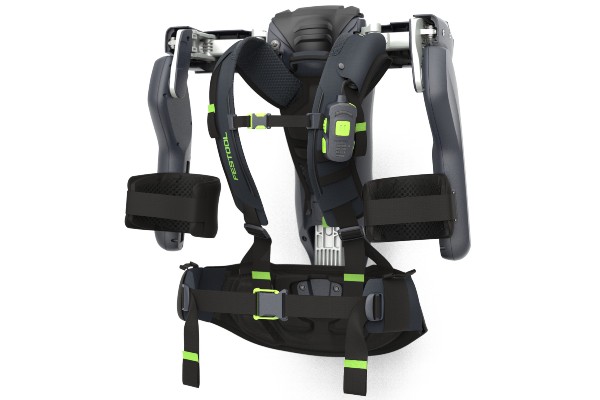 The ExoActive operates with an 18 V battery pack from Festool, just as it is used in the other tools in the Festool 18 Volt portfolio. 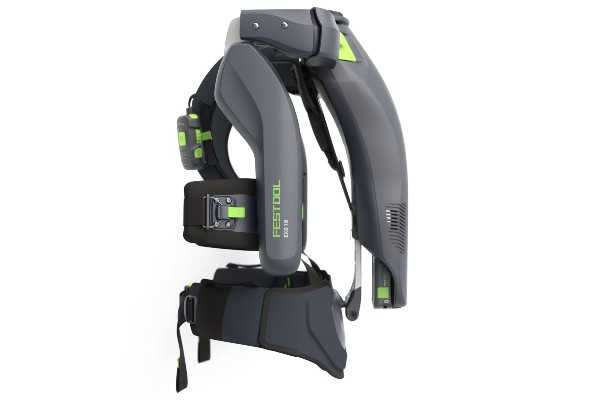 With the ExoActive, Festool presents for the first time an active exoskeleton powered by 18 volt battery power in its extensive battery system. 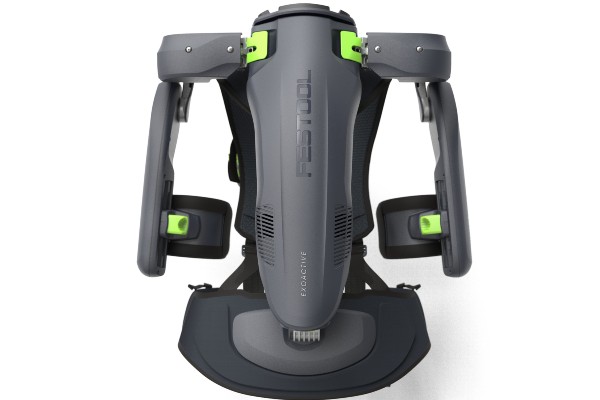 The ExoActive from Festool provides targeted support where it should and is as easy to put on as a backpack.

The ExoActive exoskeleton assists users with physical activities such as:

Less physical strain means at the same time more effectiveness, more concentration on the quality of work and thus more enjoyment of the work. The required power can be regulated on the exoskeleton. 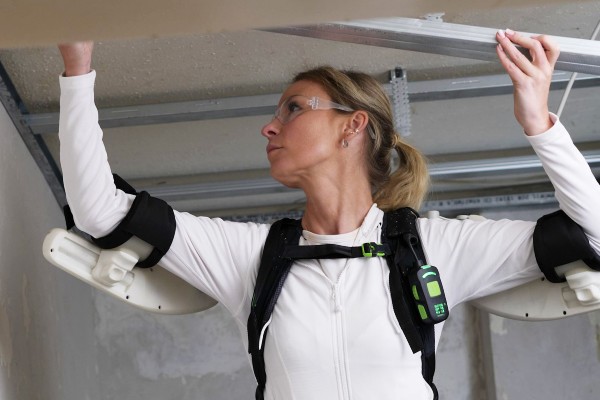 Once you have worked with the support of an active exoskeleton, you will never want to take on a wall or ceiling without it.

The ExoActive is an active exoskeleton. The support force can therefore be adjusted to the respective activity and the exoskeleton can be operated with any Festool 18 volt battery pack. On the device, users can adjust the working range as well as the strength of the support. If necessary, the power can also be paused completely, so the ExoActive provides targeted support where it is needed. Users can put on and take off the ExoActive like a backpack and adjust it to different body sizes.

"Anyone who has ever worked with the support of an active exoskeleton will never want to take on a wall or ceiling again without our ExoActive. Especially when working overhead, the exoskeleton makes it much easier to avoid overloading. Our ExoActive relieves the front shoulder muscles by up to 30 percent. This means that activities feel up to a third easier. We also have - this is a unique selling point in this product segment - an active system. That means we add external energy. The latter makes it possible to adjust the ExoActive to any work situation in seconds. The ExoActive works with an 18-volt battery pack from Festool, just like the one used in our other tools. In this respect, it is a perfect addition to our existing battery system," explains Dominic Ender, Product Manager of the
ExoActive Exoskeletons. 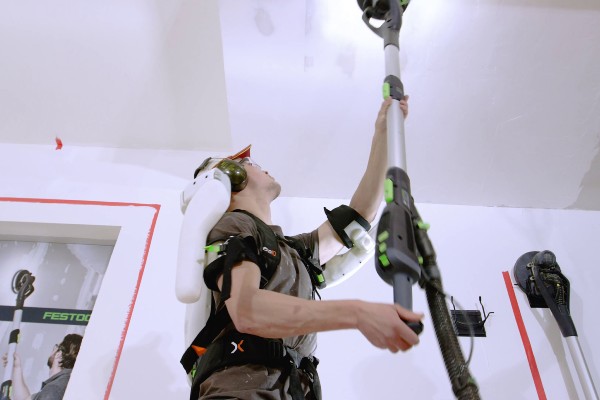 The ExoActive exoskeleton gives users an extra dose of strength while relieving pressure on the neck.

Up to 5 kg relief

The ExoActive supports the user with an additional force of up to 50 Newtons. Converted, this corresponds to a relief of about 5 kilograms. For example, the 4.7 kg Planex LHS 2 225 EQI long-neck grinder feels almost light as a feather in the hands.

"Because applications in the skilled trades are so varied, the assistance power on the ExoActive can be individually adjusted to the particular activity to be performed. By turning the power regulator, the support required at the moment can be set directly. For convenient control, the exoskeleton has three predefined working ranges: from the pelvis upwards, from the chest upwards or above the head," explains Dominic Ender.

In addition, the Festool Work app can be used to select further profiles for the appropriate support. On the control element you can: 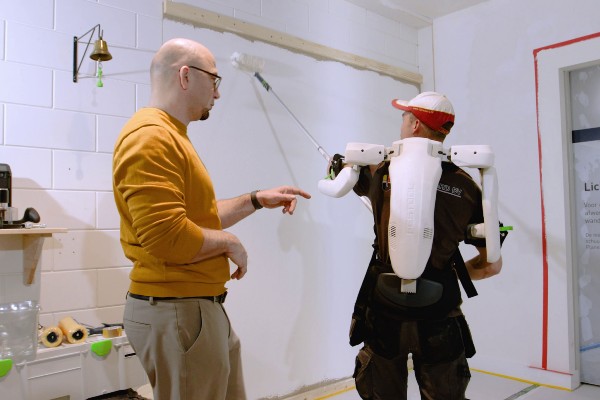 The ExoActive from Festool provides targeted support where it is needed and is as easy to put on as a backpack. It can also be individually adjusted to different body sizes.

The exoskeleton forms a unit with the body. No component interferes, no belt constricts. Whether picking up a screw, mixing paint or fetching tools from the vehicle: The ExoActive exoskeleton offers freedom of movement and wearing comfort at the same time.

All textile and harness parts of the ExoActive are removable and washable so that different people can wear it. Also, all users can be equipped with their own harness system - so the change is even faster. 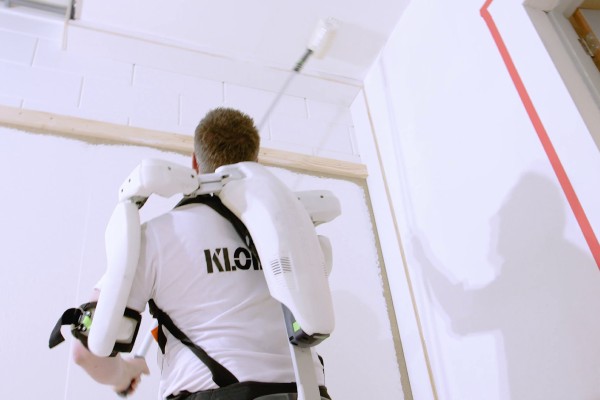 The exoskeleton assists the wearer's movements by using an external energy source to power the exoskeleton's various joints.

Exoskeletons in humans and animals

The idea of an exoskeleton as a supporting unit is not new. Exoskeletons are also found in nature as external support structures in many different organisms on land and in the sea. Mechanical exoskeletons, on the other hand, are mechanical structures worn by the human body that are usually relatively easy to remove. Active exoskeletons assist or amplify the wearer's movements by using an external energy source to drive the exoskeleton's various joints.

Included in the scope of delivery is the ExoActive with all accessories in a robust packaging, which, in addition to protecting the product, also serves as a raised tray. The ExoActive is powered by an 18-volt battery, which is also compatible with the entire Festool 18-volt system.

"Battery technology and battery-powered devices are an extremely important trend in the tool market. We have also aligned our strategy accordingly and are continuously expanding our portfolio accordingly. However, we are not blindly going by the motto "battery at any price", but rather in the way that best serves the application. We stand for the best result, so that applications work perfectly and at the same time make the trade easier, safer and better," says Sascha Menges CEO of Festool GmbH.